The ALS Icebucket Challenge….charity giving in the 21st Century. 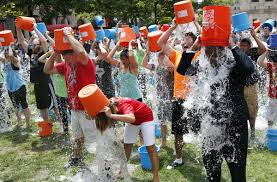 Yes, I know, I know, it’s become 2014 biggest viral stunt has been the ALS Ice Bucket Challenge which has drenched facebook walls and on image sharing website Instagram there have been 3.7 million videos uploaded with the hashtags #ALSicebucketchallenge and #icebucketchallenge. Justin Bieber’s has been the most popular – with about one million “likes”.

I can’t claim to have that many, but as so many of you have asked, you can check out mine taken on a rainy August Bank Holiday Monday here:

But while the eye-catching stunt raises momentary awareness of amyotrophic lateral sclerosis (ALS) – also known as motor neurone disease – and is reported to have raised over $100 million to date, opinion is divided as to the longer-term impacts of the ice bucket challenge, just as it was over the likes of ‘Movember’ and ‘#nomakeupselfie’ in the past and the short-lived publicity disaster that was Kony 2012. Putting aside another backlash spearheaded by those dismayed by a campaign centred around disposing of water in a world struggling to cope with areas of widespread drought and a lack of clean drinking water, how do I think the ice bucket challenge has measured up? The numbers speak for themselves:

In this country alone, other charities have benefited with Macmillan Cancer Support raising £3m from challenges. Water Aid has seen a spike in donations, including £47,000 in one day – 50% higher than it ever received in a single day before. The money came in part from people bemoaning the water wasted in the challenges

Average daily visits to the ALS association website were about 17,500 before the ice bucket challenge, compared with the peak of 4.5 million visits on 20 August (of which 83% were new to the site). During the past month there have been about 30 million visitors in total.

Here’s some facts, about ALS in case you still don’t know?

It’s a very British thing to have naysayers on everything that is popular albeit short term or long term, perhaps people want to feel like there independently going against the grain, or just want to be seen to be controversial. Go ahead with the usual negativity even the Macmillan Cancer Association jumping on board but these charities are all very worthy and even if thisn challenge is this year’s short term fad alongside the #nomakeupselfie for Cancer Research UK which raised £8m in six days and had 221,488 mentions on Twitter.

The ALS Icebucket Challenge may have soon run it’s course by October but the money raised will provide a lesson in 21st Century fundraising, using viral campaigns to charitable advantage and providing money to causes that were otherwise struggling or not raising sufficient funds.

“People change their behaviour when it becomes the “societal norm” if it’s for good, where’s the harm in it? If you want to donate to ALS Charity: MNDA, text ICED55 to 70070 or ICE to 70550 for Macmillian. Great causes.